Bacterial community fingerprinting refers to a number of cultivation-independent methods that are used to measure biodiversity in environmental samples or to profile microbial community structures, e.g. in response to experimental conditions. Examples include Denaturing Gradient Gel Electrophoresis (DGGE), Temperature Gradient Gel Electrophoresis (TGGE), Terminal Restriction Fragment Length Polymorphism (T-RFLP) and (Automated) Ribosomal Intergenic Spacer Analysis (ARISA). These molecular techniques have in common that they determine the variants of a certain gene (often the small subunit ribosomal RNA; ssu rRNA or 16S rRNA in case of bacteria) and use this measurement as a proxy for the actual microbial cell abundances in the sample. It is thereby assumed that each gene variant (apparent as a band or peak in the fingerprint) corresponds to a certain microbial taxon, often referred to as a phylotype or Operational Taxonomic Unit (OTU). 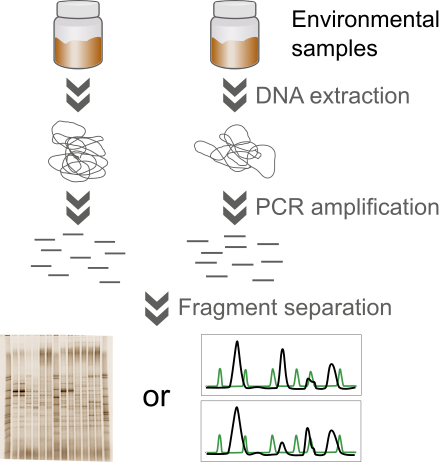 The community fingerprinting analysis starts from an environmental sample, such as soil, sludge or water, from which total DNA is extracted. The target gene or region is then amplified using PCR and the resulting amplicons are separated according to melting behavior (DGGE, TGGE), amplicon length (RISA, ARISA) or fragment length after digestion with a restriction enzyme (T-RFLP). The output is either a two-dimensional gel image (DGGE, TGGE, RISA) or an electropherogram generated by an automated sequencer (T-RFLP, ARISA).

2D gel images as well as electropherograms are conveniently handled using the gel processing tools in BIONUMERICS, consisting of background subtraction, spot removal, noise filtering, curve smoothing, normalization and band detection. The normalization procedure is thereby based on external or internal reference patterns. Normalization makes it possible to not only compare lanes that are situated on the same gel, but also to compare lanes on different gels with each other and to build up a database of profiles over extended periods of time.

Once the fingerprint data are processed, a cluster analysis can be performed to compare profiles with each other. However, since each peak in a community fingerprinting profile represents a phylotype, the typical analysis performed on such data is a band matching analysis. 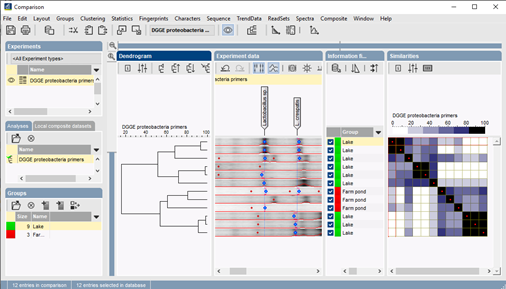 To aid in the often subjective process of assigning bands to band classes, BIONUMERICS offers an automated assignment procedure according to user-adjustable parameters. Band position statistics provide valuable feedback for tweaking these settings. In addition, the user can manually override the results from the automated band matching via a convenient drag-and-drop procedure with a multi-level undo/redo function. Band classes can be conveniently named according to the OTU they correspond to.

Specific for the DGGE technique is that bands can be excises and identified via sequencing. These results can be further analyzed with the sequence tools in BIONUMERICS and stored in the same database.

Bands are quantified either via their peak height, peak surface or 2D band areas, as specified by the user. The band quantification values obviously are a measure for relative OTU abundances. Binary or quantitative band matching tables can be exported in text format or further analyzed in the software. For example, if one is interested in measuring biodiversity, BIONUMERICS allows the calculation of various diversity indices e.g. Simpson’s or Shannon-Wiener index of diversity.

The software can automatically search for discriminating bands, i.e. OTU’s that occur under a certain experimental condition, but that are absent or present in much lower abundances under other conditions.

Graphs can be created that express OTU abundances in function of time or experimental conditions. Furthermore, ecosystems can be compared with each other based on their fingerprints using Principal Coordinates Analysis (PCoA) or Multi-Dimensional Scaling. 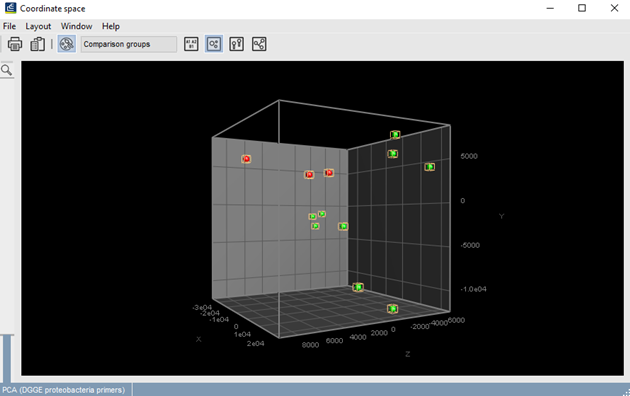