The processing of a full capillary electrophoresis run can now be completed in seconds, rather than in minutes and consists of the following three steps:

All electropherograms from the same CE run are uploaded in the Curve processing window and visualized as horizontal curves or pseudo-gel lanes. The fluorescent channels can be shown separate or in any combination. The window furthermore provides easy zooming and navigation tools.

Stutter peaks and other artifacts

Bleed-through or pull-up is a typical problem in multichannel CE, which is caused by fluorescent dye cross-talk. A high signal in one fluorescent channel thereby gives rise to a pull-up peak in another channel. The software visualizes the bleed-through areas in a customizable background color and employs a filter to eliminate the pull-up peaks.

Internal size markers are typically used in capillary electrophoresis, which allows for a very accurate normalization. A size marker can be simply picked from a list, for automatic generation of a reference system. The list currently contains 12 commercially available nucleic acid ladders, including the popular GeneScan™ 1200 LIZ® marker, featuring 68 DNA fragments.

An advanced normalization algorithm, that was specifically developed for CE profiles, reliably assigns marker peaks to reference positions. BIONUMERICS' well-known distortion bars feature is used to assess the quality of the thus-obtained normalization. 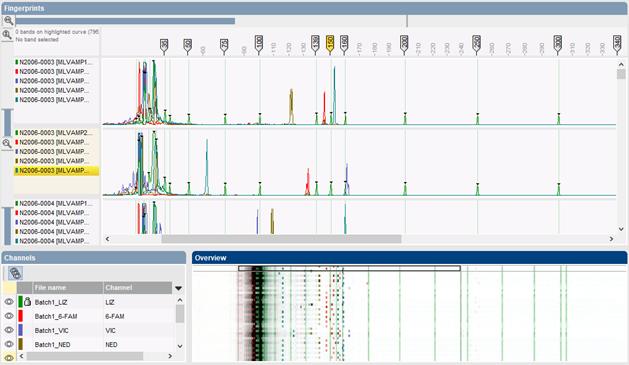